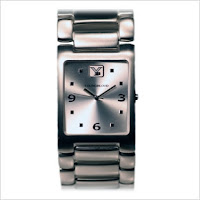 Fossil Watches was served a trade dress and trademark infringement lawsuit Monday, courtesy of Youngblood Timepieces, a newcomer to the fashion watch industry. Taking it one step further, the suit also named several high profile retailers as co-defendants. Macy’s, Nordstrom, Sears, Urban Outfitters, and Amazon.com were all named. The case is No. 11-cv-8175 in U.S. District Court for the district of Central California.

Youngblood Co Founder Patrick Martin said, when asked about the suit: "It is our intention to settle this matter with as little complication to all parties involved as possible. At the same time, we will not allow Fossil Inc. to continue to infringe on our brand name and image. Our legal team is pursuing all avenues of legal action available to us."

Although Younblood has only been around since 2007, several high profile celebrities have been wearing the watches, and undoubtedly the major names in fashion watches have been watching. According to Youngblood, they have been watching a bit too closely.
Posted by Trademark Attorney at 10:26 AM No comments: