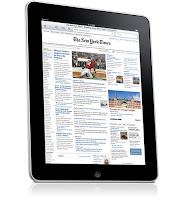 With all the buzz last week over Apple’s new iPad, a significant detail may have been overlooked. Apparently, Fujitsu has been manufacturing and selling their own Fujitsu “iPad” for more than 8 years. The Fujitsu device isn’t an Apple knockoff, but rather a different kind of pad, a Windows point-of-sale tool for retailers. But it’s also called the iPad, and Fujitsu actually applied for a trademark in 2003. Initially Fujitsu's application was abandoned in view of an existing application for "ipad" from a company called Mag-Tek! The original iPad, it seems, was a kind of pin-entry pad made by a company called Mag-Tek. Ok, Mag-Tek’s pinpad is the original hand-held electronic screen device with a registered trademark of iPad. However, due to the nature of trademark law, there are also iPad trademarks for electric motors and bra pads.

Eventually, however, Fujitsu just last year, was able to revive the "ipad" application and received what is called a Notice of Publication. During this time, an opposer can file what is called an opposition proceeding with the Trademark Trial and Appeals Board ("TTAB"). And guess who did? Yes, Apple has filed extensions of time to oppose the Fujitsu pending trademark application for "ipad" (the last extension request was filed on 12/23/2009). Interestingly, as of the date of this blog entry, and as far as we have researched, Apple has not applied for any trademark application with the United States Patent and Trademark Office ("USPTO")for "ipad."

As a general rule, senior user's of a trademark have priority over all subsequent users. Apple will likely have to establish who was the first to use the "ipad" mark. If the past is any indication of how this dispute will go, Apple's prior trademark battles have been successful. According to a press release from February, 2007, Apple and Cisco (which both had legitimate claims to the iPhone trademark) agreed to dual trademark ownership rights.

Link to embed for the Apple February 2007 press release:
http://www.apple.com/pr/library/2007/02/21iphone.html
Posted by Trademark Attorney at 1:20 PM No comments: