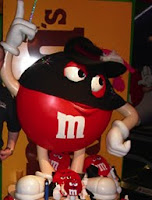 From time to time, the Mars candy company teams up with entertainment execs to market M&M’s dressed as iconic Hollywood characters. Apparently, they didn’t team up with Zorro Productions, Inc ("Zorro"). Zorro is suing Mars (and ad agency BBDO Worldwide) in the U.S. District Court of Northern California for trademark infringement, unfair business practices, and dilution under the Lanham Act.

Last fall, Mars used the famous masked character in its Halloween advertising, with a “Zorro M&M.” But Zorro, Inc., alleges that the Zorro character is protected under trademark and trade dress law, and that Zorro is famous, whether for movies, costumes, or M&M’s. It’s another reminder that when involved in the creative process, if you’re using someone else’s intellectual property, you still need their permission. Even if you’re using said property in a new and creative way.

Although, it seems that BBDO doesn’t care too much about the threat of litigation. They’ve been sued before (and lost) for the exact same thing – and M&M representation of the Times Square “Naked Cowboy.”
Posted by Trademark Attorney at 4:51 PM No comments: