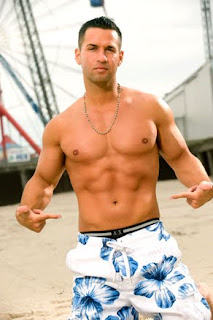 “The Situation,” a phrase made popular by the MTV reality show “Jersey Shore,” is under review for a trademark. “The Situation” is a nickname that Michael Sorrentino, the show’s ripped leading man, has given to his abdominal muscles. Contrary to rumors going around that he is attempting to trademark his abs, we have not found any such trademark application with USPTO. Rather, there are two pending applications for the mark, both in Class 25 for clothing and related accessories.

However, the story gets a little more interesting. The two applications are owned by different companies. One by Vadio Limited Liability Corporation from New Jersey, and the other by Naughty Limited, a Las Vegas firm that we have heard is operated by Michael’s older brother. We also believe that Vadio may be owned by a New Jersey man named Matthew Hunter.

The priority of right to the name should be interesting because Vadio did file the trademark application prior to Naughty Limited. However, the applications were filed differently intent to use (1B) vs. use based (1A), so it may be an interesting fight.

Another of the show’s stars, Jenni Farley, has already launched her own “JWoww” clothing line.
Posted by Trademark Attorney at 10:06 AM No comments: