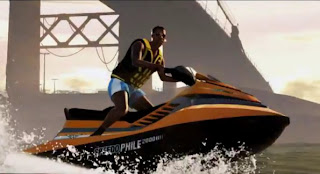 With Grand Theft Auto 5's release all gamers are excited.  But who would of thought that GTA and Speedo would get into a trademark spat?  One of the most highly anticipated video games of the year, Grand Theft Auto 5, recently released an online trailer. The trailer spread like wildfire, and one apparent detail of the new game may cause a big headache for Rockstar Games, the maker of the iconic and very popular racing game. That detail is the word “Speedophile” printed on the side of a Jetski, looking something like a logo.

The word Speedophile may have a simply descriptive meaning in urban slang terms (someone who likes going really fast). However, it’s possible that the swimwear manufacturer, Speedo could take issue with this particular logo blazened on the side of a Jetski. The main problem is that in this image, the first part of the word “Speedo” is a different colored font than “phile”. The result is that it looks like “Speedo” is somehow referenced. If the game is released with this detail (and it looks likely that it will be), Rockstar Games may get promptly slapped with a trademark infringement lawsuit.

Posted by Trademark Attorney at 11:19 AM 2 comments: