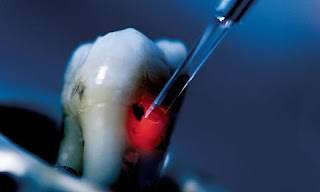 Discus Dental and Zap Lasers, makers of surgical laser instruments, and cofounded by Dr. Dorfman, notable from his ABC's Extreme Makeover show, filed a complaint in the U.S. District Court for the Central District of California against a company called Biolase, which makes an “iLase” cordless medical laser. The claims were made against Biolase after it began to market its iLase product for sale in the U.S. in March.

According to the Complaint, the issue involves Discus' product the Styla, which is a hand-held cordless soft-tissue laser device, U.S. Patent No. D587,803. Discus claims patent infringement of the design of the Styla in view of a hand-held laser device that Biolase has. The claim for trademark infringement is a bit unclear because we believe that Biolase's product is simply called "iLase".

Biolase CEO David M. Mulder recently stated that "we are very confident in the breadth of our intellectual property portfolio, and in the strength of our laser technology, and we intend to vigorously defend the Company against these allegations levied by Discus and Zap."

Biolase asserts that the suit is being made merely for the design of the unit, and not its functionality or technology.
Posted by Trademark Attorney at 12:28 PM No comments: