A Hollywood clothing manufacturer, Wildfox Couture, LLC is being sued by Hells Angels Motorcycle Corporation, otherwise known as Hells Angels. Although the name Hells Angels may seem generic, or at least non-corporate, they own the registered trademark and aren’t afraid to defend it. According to a story in the L.A. times on Tuesday, this suit is the latest in a long string of Hells Angels trademark cases. It was filed as Hells Angels Motorcycle Corporation v. Wildfox Couture, LLC and Amazon.com, et al 2011-cv-11-4141 PSG, in the U.S. District Court for Northern District of California.

“We bring these lawsuits from time to time not just to punish but to educate. Somebody thought erroneously that Hells Angels is a generic term."

The T-shirts feature the slogan “My Boyfriend is a Hells Angel” on the front, and Hells Angels official trademarked angel wings on the back. 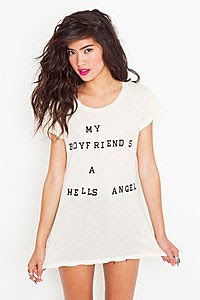 Posted by Trademark Attorney at 5:44 PM No comments: